String are nothing but a collection of characters which can be grouped together as String. In C++ the functionality of String is supported by the string library. This sample project explains how you can easily use the built in c++ string object and how you can do various string operations such as comparing, appending string and other functions. Have a look at the given below sample screenshot which displays a c++ program using the string functionality of C++. 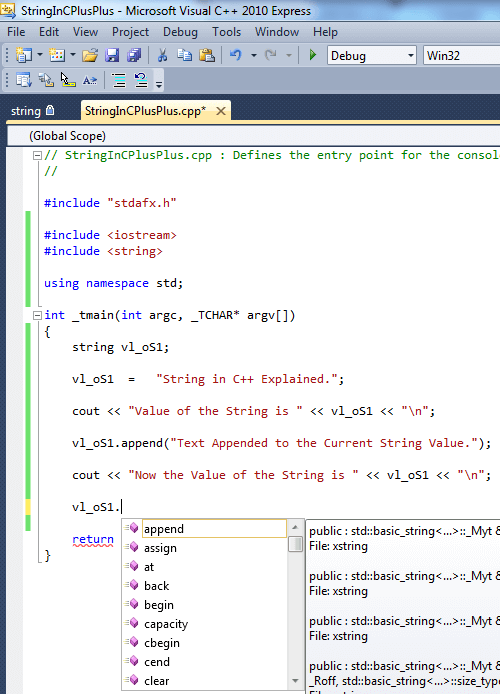 The above sample project code screenshot displays lots of information on how to use strings. First of all note that the header file named as string has been included in the project. Next note that an object of string class has been created and then a string literal has been assigned to the string object. Finally note that the . operator of the string object displays all available functions as a popup which you can use. The string class has been created by other developers and they have provided lots of string related public functions for you to use. In case you are a beginner and learning C++, do have a look at the post in which member functions of a C++ class have been explained.

Console Output of the string sample code in c++

The above screenshot displays output of this sample string project in console window. The string class of C++ is really easy to understand and can really help you to understand how developers share the classes to other developers. Do note that every member function name of the string class depicts what functionality will the function provide. Full Sample C++ Code of this string project has been posted below for quick reference.